Movie Review: Let the Right One In (on DVD)

Let the Right One In
[DVD Let]

After multiple recommendations from friends who’d seen and loved Let the Right One In, I finally took a chance and watched a library DVD copy of this 2008 horror/romance film. I use that description, because that’s what several online reviews describe it as.

Lonely, 12-year-old Oskar lives in a housing complex in Sweden. He is routinely bullied by other kids at school, and has violent fantasies of enacting his vengeance on them. A new family moves into his complex, an older man and his 12-year-old daughter. Though the girl doesn’t go to school, she meets Oskar in the courtyard of their complex and the two young ones become friends. The girl, Eli, advises Oskar on how to deal with the bullying. Meanwhile, a series of attacks and murders begins in their community, in which bodies are strung up and drained of blood.

This IS a vampire story, and fairly early on into the film, it’s revealed that Eli is the vampire, so that’s not a huge spoiler. But the rest of the plot, as Oskar and Eli become ever more inextricably entwined, and the people around them are put in greater danger, is what drives this drama. Director Thomas Alfredson wisely doesn’t kowtow to traditional “vampire movie” tropes, and this film is refreshing because of that.

My only complaints were that the pacing was very slow, and the English dubbing of the Swedish dialog was very…disjointed. But the performances of the two young “unknowns” as Oskar and Eli was compelling, and the set design and cinematography really gave this film a strong sense of place. This one won’t be for everyone, but I actually enjoyed it quite a lot.

Have you watched this one? What did you think? Did you find this review helpful?

New reviews appear every month on the Staff Recommendations page of the BookGuide website. You can visit that page to see them all, or watch them appear here in the BookGuide Blog individually over the course of the entire month. Click the tag for the reviewer's name to see more of this reviewer’s recommendations!
Posted by BookGuide at 5:00 PM No comments:

I’ll have to admit, I haven’t followed Elton John’s music all that closely — I’ve enjoyed many of his songs, and have his “greatest hits” collection, but have never really read much about his life.

Therefore, Rocketman was something of a revelation. Born Reginald Kenneth Dwight, the man who would become Elton John had a complicated life early on, and creatively seemed to become energized when he teamed up with lyricist Bernie Taupin in 1967. Rocketman is a fairly faithful biopic, hitting the highlights and lowlights in Elton John’s life. From the awkward relationship with his parents, to his broken relationships with both men and women, this film weaves a tapestry of “moments” in Elton’s life, constantly overlapping with samples of his music. The filmmakers chose to include a great deal of fantasy or surreality in their storytelling, which I occasionally found a bit offputting.

But Taron Egerton’s performance as Elton is stunning, and he actually sings the songs throughout the film. The production design and costume design (including all of Elton’s outrageous stage costumes) are both incredible.
All in all, this was a fascinating film to watch, though I’ll have to admit that I enjoyed the Freddie Mercury biopic, Bohemian Rhapsody a bit more. But that’s mainly because I’m more of a Queen fan than an Elton fan. Fans of Elton John and his music should love Rocketman.

[If you enjoy this, you may also wish to try Me (Elton John’s recent autobiography), or any of the many CDs and DVDs of Elton John’s performances.]

Have you watched this one? What did you think? Did you find this review helpful?

New reviews appear every month on the Staff Recommendations page of the BookGuide website. You can visit that page to see them all, or watch them appear here in the BookGuide Blog individually over the course of the entire month. Click the tag for the reviewer's name to see more of this reviewer’s recommendations!
Posted by BookGuide at 9:00 AM No comments:

Audiobook Review: Killed at the Whim of a Hat by Colin Cotterill 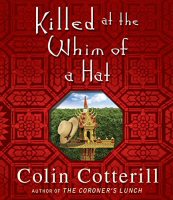 During the period while the libraries have been closed to the public, I’ve been trying to sample some audiobooks in my car’s CD player on the ways to and from work — particularly authors I’ve not tried before. One of those was British author Colin Cotterill. Cotterill had already established himself with 8 novels in the Dr. Siri Paiboun mystery series (since continued to 15), when Killed at the Whim of a Hat came out in 2011. The series is anchored by a mid-30s female Thai crime reporter, Jimm Juree, who finds her life in chaos when her mother, the head of her household, uproots the entire family from the big city in the north of Thailand and settles them down in a south Thailand coastal village, operating a run-down tourist hotel. Desperate to keep herself involved in crime reporting, Jimm jumps (actually rides her bicycle) at the chance to investigate when an old VW van is discovered buried in a farmer’s field — and has been for several decades — with a pair of dead hippies’ bodies in it. While investigating that, a modern day murder occurs at a nearby monastery — a visiting Abbot (essentially an “internal affairs” investigator for the Buddhist church) is killed. When Jimm attempts to investigate that as well, she befriends a chief suspect and sets out to prove a friendly nun could not have committed the murder.

The plot is very complex and twisty, but it is primarily the characters that drive this novel. Particularly the witty, sarcastic and world-weary Jimm — in her 30s and without much prospect of finding a suitable husband (much to her mother’s dismay). Jimm has a shy bodybuilding brother Arny, a transgendered brother (now sister) Sissi, whose computer hacking skills come in handy, plus Grandpa Jah (a retired by-the-books cop, whose laconic attitudes belie serious investigative skills). And there’s her seemingly-dotty mother, Mrai, who Jimm fears is becoming senile, but who comes up with the most thoughtful observations when least expected. In this entry volume in the series, Jimm befriends several of the local police officers, particularly the flamboyantly gay Lt. Chompu, who’s perhaps the book’s most memorable character. I can’t wait to see what additional stories there are with Jimm Juree.

The audiobook narration by Kim Mai Guest really brought this story to life, with its exotic setting and colorful characters. Not being a Thai speaker, I kind of wished I had a printed character sheet to track who was who, as the names were all very hard to follow. But it was still fun to listen to.

Cotterill has had two more Jimm Juree novels published that were set after Killed at the Whim of a Hat, plus a prequel novel, set before the family uprooted from their previous lives. There have also been a dozen or so individual short stories published digitally, featuring Jimm and family. I’m sorry more novels don’t appear to be forthcoming.

Have you read or listened to this one? What did you think? Did you find this review helpful?

New reviews appear every month on the Staff Recommendations page of the BookGuide website. You can visit that page to see them all, or watch them appear here in the BookGuide Blog individually over the course of the entire month. Click the tag for the reviewer's name to see more of this reviewer’s recommendations!
Posted by BookGuide at 9:00 AM No comments:

All content of the BookGuide Blog is covered by an "Attribution/Non-Commercial/No Derivatives" Creative Commons license -- Attribution should be to bookguideatlcl.blogspot.com. With the exception of brief excerpts, we ask that you contact us before reusing our content.

It's All Geek to Me! - Custom Newsletter

Where Our Visitors Come From

This is a Flickr badge showing public photos from the Images from Lincoln City Libraries group pool. Make your own badge here.